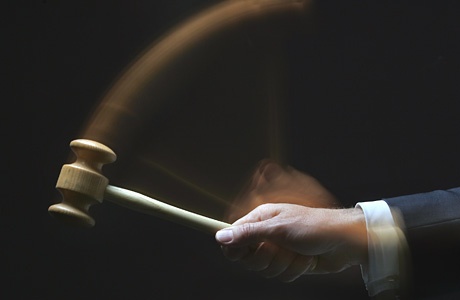 (Note: I am not an Attorney and I don’t pretend to be one. The following post is not giving any legal advice and is just an interpretation seeing it through the eyes of a Las Vegas real estate agent that has been successfully helping Las Vegas homeowners do short sales for over four years.)

Back in late December after attending a Foreclosure Mediation with some Las Vegas homeowners with Bank of America, I wrote a post about a discussion I had with an Attorney representing Bank of America concerning the possibility of banks turning to Foreclosing on Nevada Homes via the Judicial Process.

It was quite an interesting conversation with the Attorney representing Bank of America and according to him, starting 01/01/2012 and because of AB 284 that was passed on 10/01/2011, Bank of America is just going to opt towards the Judicial Foreclosure Process for it’s delinquent home loans to;”Avoid the whole foreclosure mediation process and speed up foreclosing on homes.”

For the most part, the past several years of foreclosing on homes in Las Vegas has been through the Non-Judicial Process. Pretty simple and straight forward on how the system works and the rights the lenders have in coming after homeowners for the deficiency balance. Then, the foreclosure mediation program in Nevada was started which could allow a Las Vegas homeowner to drag out the foreclosure process even longer. Throw in AB 284 that Nevada put into effect on October 1st, 2011 that some call the strictest law in the land when it comes to Banks foreclosing on properties. What used to take about seven months to take back a property has turned into on average, over 470 days with no signs of that time frame going down. All of the changes made to protect Nevada homeowners not paying their mortgages has obviously created a lot of speculation for several months in the real estate world if the Lenders were going to turn to the Judicial Foreclosure Process in Nevada to speed things up.

Let’s face it, everybody I talk to all knows somebody not paying their mortgage and living in their Las Vegas home for rent free. There is no shortage of stories out there of people that have not paid their mortgage(s) in years. I certainly know of more then a couple of Las Vegas homeowners that have not paid their mortgage(s) in over three years and have not even had a Notice of Default filed. I also know of empty, abandoned homes that are not being foreclosed on even though the homeowners are not paying anything and have not done so for years. (The home mentioned in that blog post written in March of 2012 STILL has not had a Notice of Default filed on it while the HOA liens are getting racked up on it.)

Boy, Was I Wrong thinking that the Judicial Foreclosure Process in Nevada would be no big Deal

Thank you to the very nice lady that saw the post I wrote above that called me, told me what just happened to her and sent me over the lawsuit papers filed against her where the Plaintiffs are Bank of New York Mellon (her mortgage was serviced by Bank of America) back in June, 2012. (Pay attention to June, 2012 as we go along.)

(Ironically, the list of Attorneys working for the Law firm and representing the Plaintiff, is one of the Attorneys that gave me the warning in December of 2011 of what was about to be taking place.)

The lawsuit papers she sent to me and is allowing me to publicly share (minus the personal information of course) is a Big, Big Eye Opener that Bank of America is NOT playing around anymore.

Like many Las Vegas homeowners that are delinquent on their mortgages, this particular Nevada homeowner was planning on eventually short selling her home. She was going to wait for the Notice of Default to be filed and then file for a Foreclosure Mediation Hearing. In Late June when papers were delivered to her, she originally thought it was the Notice of Default being filed but was shocked to see that it was an actual Lawsuit (Judicial Foreclosure Process) and she only had 20 days to respond.

The Judicial Foreclosure Process in Nevada

“The State of Nevada sends Greetings to the Above Named Defendant: NOTICE! You Have been Sued. THE COURT MAY DECIDE AGAINST YOU WITHOUT YOUR BEING HEARD UNLESS YOU RESPOND WITHIN 20 DAYS. READ THE INFORMATION BELOW”

Over the years, I’ve seen plenty of Notice of Default papers and have received plenty of phone calls from Las Vegas homeowners flipping out stressed out when a Notice of Default gets blue taped to their front door. Those are nothing compared to this.

20 days to respond. This particular lawsuit was filed with the District Court in Late June of 2012. Flip some pages to the scary stuff: 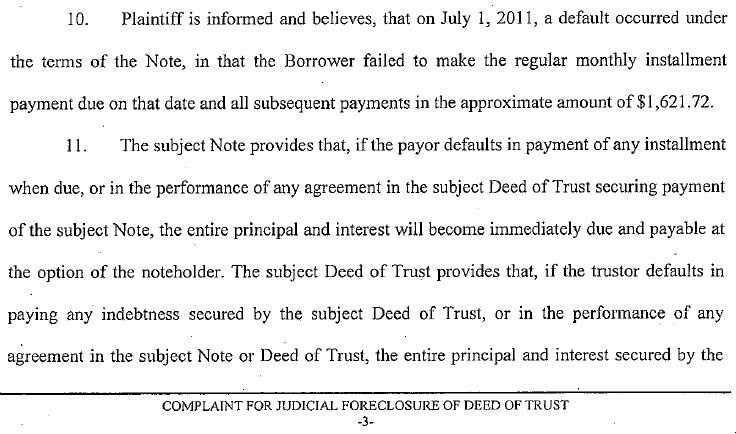 Got that? This is the acceleration clause you’ll find in most Deeds of Trust that happy homeowners sign at closing when they buy a home and don’t think that they’ll ever be in the bad situation of not being able to make their mortgage payments.

Now,here is where we start to get into everything the Plaintiff is asking for:

Unlike the traditional Non-Judicial Foreclosure process, it appears the Bank is going after missed payments plus interest.

Time to add on some more fees: 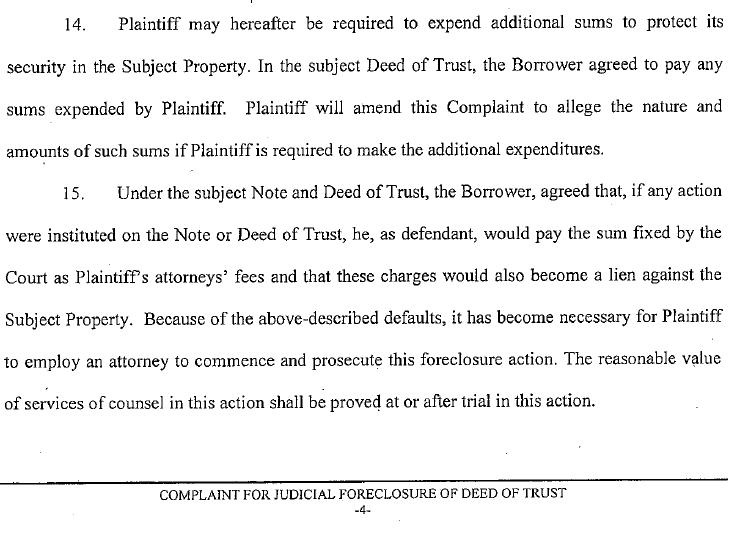 Costs involved to secure the property (change the locks, etc) and Attorney’s fees are being asked for the delinquent Nevada homeowner to pay for. I highly doubt these Attorneys being used are your discount lawyers providing legal services for half price.

Also, I’ve seen the list of fees that Banks charge for changing locks and maintaining properties. It’s a little extreme to say the least.

Under the traditional method of foreclosing on homes in Nevada through the non-judicial process, I’ve never seen a request made on a first loan seeking all of these costs requesting that the delinquent homeowner pay.

Request for Deficiency Amount to be rewarded

And it gets even worse:

And this alone should be the reason why Nevada homeowners currently delinquent on their mortgages should be very concerned. For Deeds of Trust (most mortgages in Nevada are actually deeds of trusts) signed Prior to October 1st, 2009, foreclosing Lenders in Nevada have six months after taking back a property to file a deficiency judgement complaint to pursue the deficiency balance. (Six years for Second loans.) Personally, I’ve never heard of a lender that held a first loan going after a Nevada homeowner they foreclosed on. (That’s why it is SO important to use a Las Vegas short sales agent that knows that YOU need to have the Future Deficiency Judgement rights waived and in writing for a successful Las Vegas short sale.)

In this particular Nevada Judicial Foreclosure Process, the Lender is seeking the Deficiency Judgement amount at the same time of requesting the complaint to take title back to the property. Might as well call it one stop lawsuiting where there is no mercy on the Nevada homeowner delinquent on their mortgage.

Once again, I’m not an Attorney but it’s pretty simple to see with the complaint that was filed that this is serious business. For anybody that thought the lenders were cold and heartless before, what we’ve seen up to this date is NOTHING compared to this complaint which is actually 50 pages long.

What Happened to the Nevada Homeowner this complaint was filed on?

According to her, she no longer owns the home and barely had enough time to get everything out. In fact, some of her belongings were still in the home when the locks were changed and the property was secured. Luckily, the service that was hired to perform these services allowed her back in the home to retrieve what was left.

She has now had to file a Chapter 7 Bankruptcy. It certainly does not sound like a very favorable outcome came out of all this for her. Keep in mind, this complaint was filed in District Court in Late June, 2012 and today is only August 19th, 2012. Not a whole lot of time to secure another residence and deal with all of this.

From my understanding, Lenders DO NOT have to file a Notice of Default or really give too much of any warning to file a Judicial Foreclosure complaint. 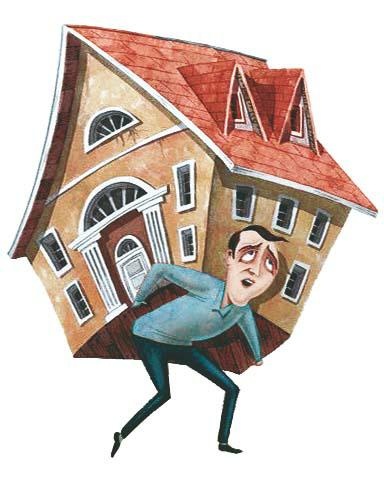 Like many homeowners in Nevada that are delinquent on their home loans, this particular homeowner was waiting for the Notice of Default to be filed in order to participate in the Nevada Foreclosure Mediation process. It’s no secret that setting a foreclosure mediation date can take months to be set and that until that mediation date is set, the lender can’t proceed with the next step of foreclosing under the Non-Judicial process. Filing a Judicial Foreclosure in Nevada seems to be a method for the lenders to be able to completely go around all of these steps and go straight to court where the process seems to be much faster in taking back the property. Not only does it seem much faster, but the lender can also ask for their Attorney’s fees / court costs and for the deficiency judgement amount to be awarded to them.

The lady who called me and sent me over the Judicial Foreclosure Process complaint did so because she wanted the information shared with other Nevada Homeowners that are in the situation she was in.

She Was COMPLETELY BLINDSIDED with a Judicial Foreclosure being filed on her and even with the nature of her job where she knows several Attorneys, there was not much she could do.

If you are in the same situation that she was in and waiting for a Notice of Default to be filed before you do something such as short sale your Las Vegas home, you might want to think twice about waiting. It’s no secret that when a lender does something new and is successful, the other lenders that are paying close attention generally follow suit. I would also think the successful Attorneys that made this happen are contacting other lenders detailing their success.

My clients and potential clients have for the most part already been warned of this and to take everything very seriously from here on out. The hurdles put in place for lenders to foreclose on properties by the Nevada legislature such as AB 284 may have just been the straw that broke the Camel’s back and made lenders turn to the Judicial Foreclosure process. From what I can see, the Judicial Foreclosure Process is FAR WORSE then the Non-Judicial foreclosure process in Nevada.

If you need an Attorney for advice to help you decide on what you need to do, I do have a list of Attorneys that provide a Free initial consultation that will review your finances and advise accordingly and let you know what you need to know. These are NOT Attorneys that are looking for you to pay them to short sale your home. Short selling your Las Vegas home with a competent and experienced Las Vegas short sale agent is practically free. I NEVER advise my clients to proceed with a short sale unless the deficiency judgement rights are waived and IN WRITING on the Short sale approval letter.

For getting started in the right direction, all you need to do is Call 702.592.3058 or visit my Las Vegas short sale information page and fill out the form to get started.